Austria is our homeland – let us travel together through the country. We decided to visit some of the so-called Gourmet Regions. There are about 80 at the moment. Austrian areas with culinary specialities – fruits, vegetables, meat, fish, dairy products, honey, etc. Visiting these regions is much more than tasting and smelling. You learn about the landscape and the people related to the products, you can watch the single steps of processing. Food trend LOCAL FOOD live. And the food trends SEASONAL FOOD, CRAFT, TRANSPARENCY, MEET FOOD as well (Source: Food Trend Map 2021). You start feeling becoming an expert, a connoisseur. It is fun. And changes your mindset.

The Austrian region called Styria is famous for its apples. It starts in spring with the blossoming of the apple trees – a dream in white and gentle rose accompanied by thousands of humming bees. (Save the bees and feed the world becomes more and more important.) The apple harvest starts in the late summer days of August and is climaxing in September, October. Biting in an apple just picked from the tree is pure indulgence. It is easy to store apples for weeks and months. Apples are delicious ingredients in many traditional dishes like apple strudel, apple sauce – eat it together with the famous Austrian Kaiserschmarrn, excellent – or think of enjoying baked apples sitting in front of the fireplace on a freezing cold winter’s day. You can make apple juice, apple cider, apple wine, apple schnaps. You can enjoy apples the whole year – till the next harvest.

ASTONISHING: THE HUGE VARIETY OF APPLES

Let’s take a more global view. About 30.000 apple types are known globally, about 6.000 are cultivated. There are historical ones like Golden Pearmain, said to be “born” around 1510 in the Normandie in France, for many centuries considered one of the best table fruits. Most of the apple types we know today were cultivated during the 19th and the first decades of the 20th century: Boskoop, Cox Orange, Jonathan, James Grieve, Gala, Golden Delicious, Granny Smith and so on. Some of them became mainstream worldwide. Some old types experience a renaissance remembering the larger biodiversity we had once. And new types are coming up like Cosmic Crisp, introduced in 2019 in Washington State, the American Styria when we talk about apples

The apple originally comes from Central and Western Asia and was already cultivated around 10,000 BC in the region of what is now Kazakhstan. The apple Malus sieversii is the ancestor of all our apples. Near the border to China at the foot of the Tian Shan Mountains there are still exiting forests of wild apple trees. If you are interested in getting more details we can recommend the ARTE-documentation “The origin of apples” by Catherine Peix. The old name of the city of Almaty at the foot of the Tian Shan Mountains, one of the country’s cultural, scientific and economic centers also refers to the cradle of the apple: alma means apple in Kazakh language, ata = grandfather. By the way: The head office of our subsidiary in Kazakhstan is located in Almaty.

The apple came along old trade routes to Southern and Eastern Europe. Around the time of the Roman emperor Nero (37–68 AC) the Romans and also the Greeks introduced large-scale apple cultivation as we know it today. They grew sweet, more digestible apples. In the 16th century apples became economically interesting and since the 19th century specific breeding is documented.

Today about 83 million tons of apples are harvested every year in about 100 countries around the globe (Source: FAO). So you can say the apple is a real glocal fruit. And for many people it is a favourite one.

A FLAVOURISTS POINT OF VIEW

Not only the fruit is very popular, the apple flavour as well. It is one of the top three flavours globally seen in non alcoholic beverages, among the top five in confectionery and one of the top fruit flavours in dairy products and ice cream (Source: Mintel GNPD). According to the huge amount of apple types, apple flavour allows to give every product a unique taste profile.

The esarom flavourists have created apple flavour profiles like juicy-sweet, crispy-fresh or sour-tangy. But as well apple flavours where the character of individual apple varieties like Gala, Golden Delicious or Granny Smith is in the foreground. One of our favourits is Braeburn. The portfolio includes also apple blossom flavour and flavours of processed apples: Austrian apple strudel or apple pie where you can find also a hint of dough – could be of high interest for ice cream and refreshing beverages. The flavour of baked apple is a little bit spicy, with a hint of cinnamon, nuts and honey. The apple cider flavour is described as floral, vinous, slightly fermented – a more adult apple flavour.

APPLE IS PERFECT FOR FLAVOUR PAIRING.
IT GOES WELL TOGETHER WITH THE TRENDY BOTANICALS.
ISOLDE TOMANN, SENIOR FLAVOURIST, HEAD OF FLAVOUR CREATION

The apple flavour is sociable and goes well with many fruits and equally with kitchen garden herbs like thyme, rosemary or basil. This results in classic products with a trendy twist which have potential that they are liked by many. They can delight conservative consumers and the more adventurous ones alike. (The trend scouts of Innova nominated “The Adventurous Consumer” Top Trend Number One in 2019.) 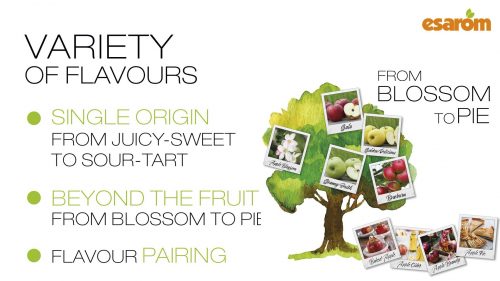 A TRENDSCOUTS POINT OF VIEW

The apple and the apple flavour as well meet the spirit of the time:

KEEP AN EYE ON APPLE:
APPLE FLAVOUR MEETS THE SPIRIT OF THE TIME.
SUSANNE WINTER, MARKETING

Sitting under the apple tree on a sunny Sunday afternoon we look forward to the Apple Corso on Styrias Apple Street next year – postponed because of COVID-19 – and we enjoy grandma’s delicious apple strudel with vanilla ice cream.

At ANUGA 2021 in Cologne we enjoyed days of trend-scouting and net-working.